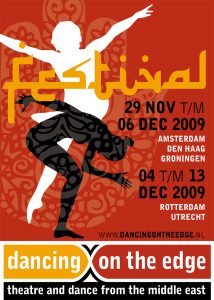 The second edition of the Dancing on the Edge Festival took place from the 29th of November to the 13th of December 2009 in Amsterdam, Groningen, The Hague, Utrecht and Rotterdam.
Artists and performances from Morocco, Lebanon, Iran, Iraq, Syria, Palestine, Israel, Jordan and Egypt were featured. The performance program included both dance and theater pieces and music concerts. A broad range of debates, films, discussions, interviews, meetings and a cultural education program were also part of the festival.